What is a septic tank baffle?

Are you baffled by what a septic tank baffle is? Ever wondered what they actually do? Ok, it might not be one of life's greatest puzzles, but if your property has a septic tank, then it's worth knowing what's what.

First of all, it's useful to know how a septic tank works. All of the wastewater from your property's toilets, showers, sinks and washing machine flows through a pipe and into your property's septic tank. The waste then separates into three different layers (bear with me, this is where it gets a bit unpleasant!):

If the lumpier stuff escapes from the tank and into the soakaway system, it blocks it all up and prevents the soakaway from functioning as it should. This is one of the most common soakaway problems in fact, and what makes it worse is that once it's happened it's impossible to undo.

So, in our quest to avoid septic tank problems, this is where our friend the baffle comes in. The baffle sits inside the top of the tank, and all the waste water enters the tank underneath it. The baffle then acts almost like an upside down sieve, keeping all the solids and fats in the tank, and ensuring that only water can escape into the soakaway system.

Below are a couple of lovely septic tank diagrams to show you the two most common types of septic tank baffles. The first diagram shows what's called a 'welded baffle cone'. It's effectively wedged between the two half spheres of the septic tank when its manufactured. As you can see it has a ball which sits in the neck of the baffle cone (yes, it does look like a witch's hat, but I think we should stick with baffle cone for now), and it's this which stops the solid waste from spilling out to where it could escape through the outlet pipe. Instead, the waste water rises up through the small slots you can see, and out through the outlet pipe.

The second diagram shows what's called a hanging baffle. This is usually held in place to the neck of the tank by metal hooks. You might already know if you have this type of septic tank baffle if you've been brave enough to take a look into your septic tank, as the hooks are usually visible at the top of the tank.

So far so good, we now know roughly what a septic tank baffle looks like and have a vague idea of what they do.

The problems happen when the baffle becomes damaged. This can happen in a few different ways - external pressure on the tank can cause it to bend out of shape, and baffles are also susceptible to being damaged when septic tanks are being emptied.

Can a damaged septic tank baffle be repaired?

Septic tank repairs can often be challenging, and baffles are no exception as they are often an integral part of the tank itself. Unfortunately, often the septic tank needs to be replaced once the baffle has become damaged. The problem also is with the damage to the soakaway - and soakaway repairs are often very difficult. This is because when the wrong stuff gets into the soakaway because the baffle isn't doing its job anymore, it blocks up all the holes and perforations whilst polluting the sub-soils.

Here at UKDP we have a specialist team who can manage everything on your behalf - from investigating the problem, through to managing your insurance claim (we are authorised by the Financial Conduct Authority to do so) and undertaking any works agreed with your insurer. Call us today on 0800 028 9903 to find out more about how we can help.

Septic tanks – myth busting the things you shouldn’t be doing 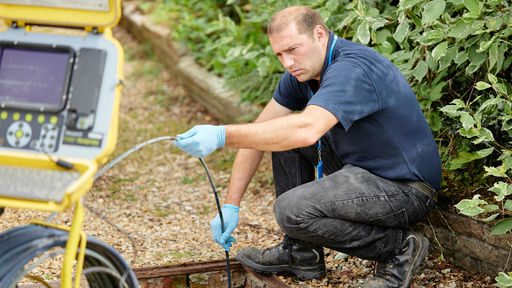 Lockdown Boredom Buster #105 - Get to know your septic tank!

My septic tank discharges into a ditch. Is this ok?